I wrote this on the Facebook Arcade1up fan page. 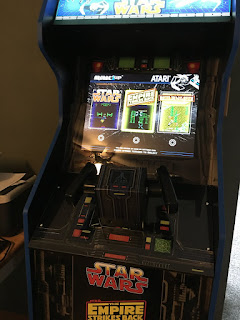 I bought the Star Wars Arcade when Walmart had that package deal with the Robot for $350.

I had much more difficulty building this one. My step-dad usually helps me. He is 83 and I am almost 60, so we are not real fast. It usually takes us a while. The problems started when we tried to attach the second side. We couldn't get anything to line up properly, so later I attempted this on my own. I started with the lower front and worked my way around the bottom and up the back and finally the light-up marquee. Often I had to loosen screws that I had already put in to adjust it so that I could get the next screw to line up. Then I had big problems with the marquee getting it to line up.

However, the biggest problem was attaching the display panel to the second side. The holes did not line up at all. It was like the cabinet was slightly too wide. I had to remove the plastic brackets from the display panel, attach them to the side, and then reattach the display panel. The trouble was that the most I could get were 3 of 4 screws in each of the two brackets, which is probably good enough to hold it forever.

I had trouble with the display brackets with the other two arcade1up's I built, but they weren't near this difficult.

My total build time was around five hours. I spent well over an hour trying to get those display panel brackets to line up, and I spent quite a bit of time trying to get all the other holes to line up.

So was it worth it?

This was my all-time favorite arcade game, so I definitely wanted this one. After playing a couple of games, my feeling on the yoke controller is that it might not be as good as the original but close enough to have fun with it. I feel like the buttons take more effort to press, and this is where I started to have a problem. I absolutely loved this game in the 1980s when it was in the arcade, but the last time I would have had an opportunity to play it was around 1990 give or take a couple of years. That was 30 years ago. I was 30 years old then, but now I turn 60 in three weeks. I found my fingers getting sore from all the button mashing on just a couple of games, so I am wondering if the buttons really do take more effort to press compared to the original arcade? I may have to limit how much I play if my fingers bother me too much. However, I also figure that this might be good exercise for my hands.

I am happy to have the Star Wars Arcade. I'm sure that I'll have some fun with it.

Posted by John Coffey at 9:12 PM No comments: