My 2009 iMac shut down for no reason. It rebooted okay. If I had to guess I would say it is a problem with the power supply, which I had to replace once before. Chances are this will get worse over time until I do something about it.

John Coffey
Posted by John Coffey at 11:54 AM No comments: 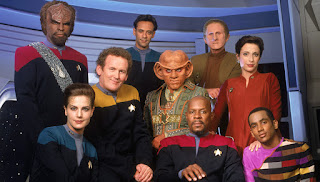 I remember somewhat fondly the four different Star Trek Series that aired from 1987 to 2005, but especially Star Trek Deep Space Nine for its really interesting and vast assortment of colorful characters.  It was the second most popular Star Trek Series of that era, behind Star Trek The Next Generation.  It aired from 1993 to 1999.
Star Trek The Next Generation spent a couple of years setting up Star Trek Deep Space Nine as a spin off series.  It introduced two new alien races, the Cardassians who were the oppressors of the Bajorans.  When Star Trek Deep Space Nine started, Cardassia had ended its occupation of Bajor, and The Federation was helping the new Bajoran provisional government get started.
In the 90's I really loved this show.  So much so I still remember most of the individual episodes.  I found myself feeling nostalgic for the show, missing how much I enjoyed watching it.  So I made an attempt to watch it again on Netflix Streaming.
The problem with watching this show again is that nobody cares about Bajor anymore.  We were only introduced to Bajor as a plot device for this series.  We will probably never hear of Bajor again, because it is not part of the current Star Trek universe in films and TV shows.  Most of the shows are episodic where they don't deal with a grand story arc, but instead focus on some sort of political strife on Bajor.  I chose to not rewatch many of these episodes because they don't seem as interesting as they were when the show was new.
Instead I chose to mostly rewatch the episodes that dealt with a larger story arc, which was introduced at the end of the first season.  A new enemy is introduced, The Dominion, which is run by The Founders, who are intent on conquest.  We get a big surprise when we learn that The Founders are the same alien race as one of the main characters on Deep Space Nine.  The bad news is that the next four seasons would only barely touch this grand story arc, just three or four times per season.   However, in the last couple of seasons the show hit high gear with an all out war between The Federation and The Dominion.
What makes the show great is the characters.  It has a variety of alien humanoids who are interesting and endearing.  Many of the main characters are in one way or another outcasts from their respective societies.  They develop relationships and mutual dependencies with the other characters, making the show very much a space opera, and a good one at that.
After rewatching the series, I am impressed with the way it ended, and overall I am very pleased with the show because it has many layers in its storytelling.  It weaves together many complex storylines over its seven year period.
​John Coffey​
Posted by John Coffey at 9:42 PM No comments:

Please give this a couple of minutes.
https://www.youtube.com/watch?v=W9X1kNTxJxg
I'm one of those guys in his 50's (57) who likes retro games.  Star Wars The Arcade Game was my favorite arcade game.
Posted by John Coffey at 8:24 AM No comments:

https://www.youtube.com/watch?v=GC7Onhm3tto
​Still my favorite game.​
Posted by John Coffey at 9:38 AM No comments:

Effective this Thursday, 2018-04-05, The Columbus Chess Club will be meeting at the Lewellen Chapel on 2580 Grissom Street, Columbus, Indiana, 47203.  This is close to the airport.
The hours will be from 5:00 PM to 9:00 PM.  Games will continue to be 10 minutes in length.  Boards, pieces, and clocks will be furnished.
Open to all players.  Children under age 16 must be accompanied by a parent or an adult.
It is not expected that you come and stay the whole time, although you are more than welcome to do so.
There is ample parking just west of the Chapel.  Please enter on the north side of the building.
For additional information, please call 812-603-3893, or see http://columbuschessclub.blogspot.com/p/about-columbus-chess-club.html
--
Best wishes,

http://www.entertainmentjourney.com
Posted by John Coffey at 11:30 AM No comments: