My name is John Coffey.  I was a Timex-Sinclair enthusiast in the 1980s.  I wrote some utilities and things that I sold. Around the beginning of 1986, I finished and self-published a videogame called Diamond Mike.  I no longer have a copy of this game, although if one were to turn up someplace, I would love to get a copy.

Also in 1986, I ported the Diamond Mike game to the Atari ST, with slightly better graphics, and I do have copies of this, although I don't own either computer anymore.

In 1993, I went to Utah to work for a videogame developer.  I would eventually end up working for a company that made satellite communication systems.  I retired from this company and returned to Indiana.

I am currently trying to learn software development on iOS and Android.

Just as many people are still enthusiasts for the 8-bit era, including writing new games for the Atari 2600 or the Nintendo Entertainment System, I feel that the potential of the 2068 was never fully realized, and I have ideas for 1 or 2 games that I want to develop for it.  This is not for profit.  I only want to do it because I love the 2068 computer.

To do this I would need to get an emulator, learn to use it, and maybe find an assembler that I can use.  Back in the 1980s, I wrote my own assembler, and a compiler, but I don't have any of these anymore.

This project would not do me much good if there were no 2068 enthusiasts around anymore.  I want to write something that I can share with other people.

John Coffey
Posted by John Coffey at 6:03 PM No comments:

A couple of hours ago I got my first COVID-19 vaccination. It was the Pfizer vaccine, which is the one I wanted since I was able to make an appointment for my next vaccine just three weeks from now.

I didn't even feel the shot. This was no worse than a flu shot. However, my arm immediately started feeling sore. It still feels a little sore, but not very much. Afterward, I had to wait in an observation area for 15 minutes which was no problem. 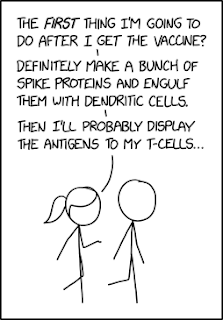 This video shows the gameplay of Diamond Mike on the Atari ST.  In 1986, I ported the game from the 2068 computer to the Atari ST computer.  The graphics are a little better on the Atari ST.
Some of the later levels not shown here are more visually interesting and more complicated.  It is not clear if the person showing the game fully understands how to play the game.  It appears as if he doesn't.
The demo appears to be running on an Atari ST emulator.
https://www.youtube.com/watch?v=h139l3H2rnk
Posted by John Coffey at 2:07 PM No comments:

In the early days of computing and videogames, magazines devoted to specific systems were very popular.  By 1986, the Sinclair and Timex-Sinclair lines of computers were a dying brand, but they had a very devoted set of followers, of which I was one.  The primary feature of the Timex-Sinclair 2068 computer was its relatively low price of $200.  Compare that to the Commodore-64 introduced in 1983 at $595, which is around $1600 in today's dollars.  Other brands of computers were higher.  Most of these were way too cost-prohibitive for me, so I went with the cheapest model, but I happened to very much like the brand.
I did an internet search for a videogame I wrote in 1985/1986 called, "Diamond Mike".  I found a magazine that I had completely forgotten about where I had a quarter-page ad on page 34 for the game, along with another quarter page of products that I was selling, most of which I don't remember selling.  I think that I had entered into some kind of partnership with another company to sell their products.  The wording of the ad looks somewhat unprofessional like it was written by me, which it was, but this was typical of these relatively obscure magazines of the time.  I think that I had the advertisement typeset by a professional printer because in those days we didn't have modern computers to help us do that.  The game was in color, but the magazine was black and white, so the advertisement is Black and White.
The magazine did a "review" of the game on page 4.  Essentially they were scratching my back for buying advertising.  The wording of the "review" isn't that different from my advertisement, and they also said a few nice words.
https://www.timexsinclair.com/article/an-american-original/
The graphics capabilities of the 2068 computer were not as quite good as the more expensive brands, and since I did my own artwork and I am by no means an artist, the graphics of the game are pretty basic.  This was typical for many computer games of the time.  What I could do well is write efficient code in "machine language", which is the internal language of the CPU chip.   An honest review of my game would have said that it was an imitation of another game called "Boulder Dash", but when "Boulder Dash" was ported to the 2068 computer months later, its code ran too slow.  They didn't do a good job on the port.  They should have gotten me to write the game.
This kind of work eventually led me to get a job in the videogame industry.
Posted by John Coffey at 9:20 PM No comments:

Yesterday I had to dig my car out, with some help from the neighbors, to go get some groceries. I had to dig out the tires twice to get the car back into the garage. I tried a couple of times to shovel the driveway, but it kept snowing so I gave up. I might try again tomorrow, but I have kind of resigned myself to staying home. It is supposed to all melt on Sunday and Monday, although we might get some more snow Sunday night.
--
Best wishes,

http://www.entertainmentjourney.com
Posted by John Coffey at 8:24 PM No comments: