Lunch I am planning on having ...

Posted by John Coffey at 9:56 AM No comments:

I ordered a refurbished iPad 2 from Apple for $349.

Apple waited till a couple of hours after the iPad 3 announcement to drop the price on the iPad 2.

Posted by John Coffey at 3:52 PM No comments:

Yesterday's radio news brought the news of devastating tornado destruction in Henryville, Indiana and many other areas in Indiana and Kentucky.

For those who don't know, Henryville is a tiny town probably less than a thousand people located in Indiana 19 miles north of Louisville, Kentucky.  Like many areas in southern Indiana, Henryville is surrounded by forest and farms.  It is very green there.  It is at the intersection of two state roads and next to a state forest park, but it also adjacent to Interstate 65.  I have literally passed by Henryville hundreds of times on my way to the greater Louisville area.  Many times I would take the "scenic route" through Henryville instead.   I sometimes stopped for food or gas in Henryville.

I am told that the high school in Henryville is no longer usable.  All access to Henryville was temporarily shut down and the interstate was closed.

I lived about 6 years in Scottsburg, Indiana where my mother is from, which is 10 miles north of Henryville.  According to my mother, the tornadoes have temporarily deprived even Scottsburg of services like phone and internet.

I grew up in Columbus which is 50 miles north of Henryville, but I have managed to live in several small towns within 20 miles of Henryville.

Henryville is the birthplace of Colonel Sanders.  He often visited his church there.  Around 40 years ago we saw him on Interstate 65 presumably on his way to Henryville.  He was with his wife and he was driving.  He looked very old.  He died in 1980 at the age of 90.

John Coffey
Posted by John Coffey at 12:32 PM No comments: 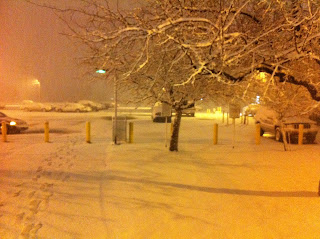 Posted by John Coffey at 8:36 AM No comments: