In my opinion, bicycle riding has been great for my health.  My tiny neighborhood is too small to make for an effective bike ride, so I do a very large loop involving the neighborhood to the west of me.  Google thinks that the entire bike ride should take 13 minutes, but it initially took me 25 minutes and I have cut that down to 22 minutes.  For parts of the trip, I ride on the sidewalk, but mostly I ride on the streets.  Except on Middle Road, I rarely have to deal with cars.  I try hard to avoid them. 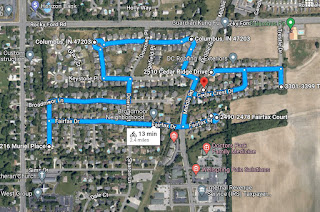 There is a portion of my bicycle ride that is a little more dangerous because I am riding a short distance on Middle Road which is a pretty busy street. 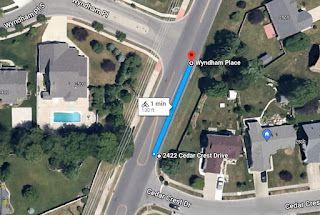 Normally this jaunt over to the other street is a mad dash to avoid cars.  I don't venture out until there are no cars coming, but they come so quickly on Middle road, especially from the south where I can't see as far, that I have had 4 of 5 cars unexpectantly come up behind me, which makes this portion of the bike ride more dangerous.  Sometimes if there were cars coming from the south, and none coming from the north, I would switch over to the left side and ride along the left edge of the road.  The most dangerous situation would be if cars would be coming from both directions, which rarely happens because I have a much better view of the traffic from the north.
I discovered that the sidewalk on my side of the road turns north just for a short distance followed by a metal utility plate on the ground, which allows me to enter Middle Road from the grass. The cuts down the distance on the road.   I then proceed at about a 70-degree angle to the other street.  I am entering Middle Road at the left turn region, which gives me the flexibility to change lanes.
In theory, I could ride the grass all the way up.  Or I could cross Middle Road from Cedar Crest Drive to the sidewalk across the street.  The curb is so high that I can't do this on the bicycle and would have to walk it across.
There is an intersection further south on Middle road that is much easier to cross.  Sometimes I have ridden the sidewalk down there so that I could cross more safely.
--
Best wishes,

http://www.entertainmentjourney.com
Posted by John Coffey at 9:57 PM No comments:

I have to wonder about people's common sense?   My entire philosophy of life is to not do stupid stuff.  In other words, don't take unnecessary risks.  People die from accidents all the time.  I would rather not be a statistic.
https://www.youtube.com/watch?v=s9u7iV1VIYA
Posted by John Coffey at 3:59 PM No comments: 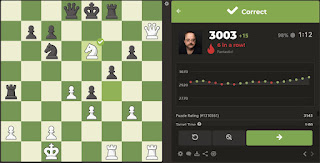 I reached a milestone on chess.com by reaching a 3000 rating for solving chess puzzles. The site's puzzle rating has little to do with real chess ratings because the puzzle ratings are comparatively inflated. I have seen average club players reach puzzle ratings of 2000 or 2100.
Nevertheless, reaching 3000 took a great deal of effort.
The site presents chess problems that have difficulty proportional to your current puzzle rating. I have reached a point where I am almost as likely to fail as I am to succeed. I find that I am not analyzing as well as I should so I am trying to make myself focus deeper. The casual puzzle solver will look for what the "trick" is in the position and make a move without thinking about it too hard. However, I can no longer just make cursory judgments.

http://www.entertainmentjourney.com
Posted by John Coffey at 12:49 PM No comments:

My entire philosophy of life is to not do stupid stuff…

John Coffey
Posted by John Coffey at 10:38 PM No comments: