A couple of months ago I decided to temporarily swap my 4K 55" smart TV with my Step-Dad and Mom's 40" dumb 1080P TV that I had purchased for them as a Christmas gift.  They need a bigger screen more than I do.  I watch most stuff on my computer anyway.
Comet TV is one of the few broadcast stations that I can get.  It broadcasts re-runs of Sci-Fi TV shows and mostly terrible Sci-Fi movies.  I occasionally watch shows on it.
Unfortunately, Comet TV broadcasts only in 480i, which is also the same resolution as videotape and CRT televisions.  On my 4K TV, it looks absolutely terrible.  Surprisingly, on the 1080P TV that I am now using, it doesn't look so bad.
--
Best wishes,

http://www.entertainmentjourney.com
Posted by John Coffey at 8:43 PM No comments:

I was unlucky last night because I either hit something on I65 that destroyed my tire or I had a blowout. While driving southbound on I65, I heard a loud bang. I didn't see any debris on the road that would have caused this. I immediately pulled over to the side of the road. There was a policeman in the median right where I pulled off, apparently trying to catch speeders driving northbound. I thought that he might volunteer assistance, but I'm not sure that he even noticed me. I was going to call my Geico Roadside Assistance anyway.
I got out of the car and looked at my tires, and none appeared flat. So I thought that maybe the car is still drivable and that I could make it to the Edinburg exit three miles down the road, but after driving another half mile it was obvious that something was wrong with the car.
However, I had a problem with my Geico Roadside Assistance. After calling people for 25 minutes and keeping me on hold, they couldn't find anyone on their network to help me. So they told me to call 911. I called 911, which gave me a number of a wrecker service in Edinburgh, but they couldn't help. They gave me a number of a wrecker service in Columbus who also couldn't help, so the Columbus service gave me the number of Graham Wrecker Service in Franklin which came and helped me by changing the tire. I got home safe after a 90-minute delay.
Fortunately, I have a road hazard warranty on all my tires. The last time I had to wait days for the replacement tire, but I have an appointment for 3PM tomorrow for a replacement tire and an oil change.
What lessons can I learn from this? I felt pretty vulnerable stranded at night on the side of the Interstate with hundreds of cars and trucks going by at deadly speed. It was very frustrating that my Roadside Assistance service couldn't help me. (I'm going to call them back to complain and likely get a reimbursement for my expenses.) It might be wise to know a few wrecker services in your area and have them programmed into your phone. I am also going to investigate whether it is worthwhile to get a different Roadside Assistance service.
--
Best wishes,

http://www.entertainmentjourney.com
Posted by John Coffey at 10:47 AM No comments:

First day of spring! I celebrated with a lengthy bike ride. I am optimistic for the future. I can see clearly now the rain is gone ...
https://www.youtube.com/watch?v=FscIgtDJFXg
Posted by John Coffey at 9:48 PM No comments:

The #1 Factor For Achieving Success (Online)

I really like this video.  Although the speaker is talking about online success, I think that his advice applies to any type of success.
https://www.youtube.com/watch?v=6esv0ceuV64
Posted by John Coffey at 10:34 AM No comments:

I find this amusing.  I've tried some different kinds of Asian foods, although I don't remember if Korean was one of them, although I think so.  I tried Vietnamese, but I wasn't thrilled with it.  I sometimes would eat at a couple of different Japanese restaurants, one of which had a lot of fried tempura, which tastes great.
https://www.youtube.com/watch?v=0kEXWjMo3dY
As far as I am concerned, the best food I ever had was at a Persian restaurant in Salt Lake City.  The restaurant was in the back of a Persian grocery store.  I also really like beef brisket.

Posted by John Coffey at 8:18 PM No comments:

there will Never Ever be another Simpsons episode like Homer's Enemy

https://www.youtube.com/watch?v=Tq-qU_GCCLI
I had seen at least part of the episode "Homer's Enemy", but never gave it much thought.
I only on rare occasion watch the Simpsons, but I enjoy it, and I especially enjoyed the early years.  I had never seen the show until I had a chance in the 1990s to work a little on a Simpsons videogame, so I took an interest in it.
There is an almost universal consensus that starting with Season 9 Episode 2, "The Principal and the Pauper", with an absurd storyline about Principal Skinner being an imposter, the show went into decline.
I am amazed that the show has lasted 32 seasons.  In one of the episodes celebrating something like the 500th episode, there is some text in the end credits that says, "Think of all the things you could have accomplished if you hadn't watched this show."
Posted by John Coffey at 5:07 PM No comments:

Our family used to go to this place, and I loved it.  I remember the food being pretty good.  Sometime between 1974 and 1977, while I was in Jr. High School, there was a tornado that hit Columbus, Indiana.  I remember it well.  It tore the roof off of the King's Table building while people were inside dining.  The restaurant reopened (I think) but eventually went out of business.  That location is now a gas station. 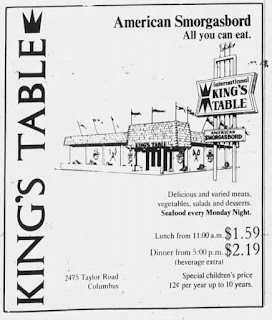 http://www.entertainmentjourney.com
Posted by John Coffey at 2:57 PM No comments: