The fact that people made mechanical computational devices shows that there is a strong need for computation.
https://youtube.com/shorts/IRbJNZLI1Ys?feature=share
I feel like the birth of the computer started with mechanical devices.
NCR started in the cash register business, which technically was an adding machine with a mechanical crank to make it work.  From there it is a natural transition to electric, then electronic, and eventually digital.
In order to help with the U.S. census, in the late 1800s, someone invented the mechanical tabulating machine that used punch cards.  Census takers would punch holes into cards depending upon the answers to questions that they asked.  Then the machine could process the cards and add up the answers to specific questions.  This is long before we had computers, although the tabulating machine could be considered a type of computer.  This punch card technology would later be used to store computer programs and data.
Around 1971 my parents had a mechanical adding machine to help with their business.  It was heavy and bulky but it did the job.
Around the same time, a Japanese company contracted with Intel to produce the first electronic calculator.  Up to that point, Intel had made integrated circuits with relatively simple logic circuits.  It was possible to build a big computer by combing a large number of these logic chips.  So to make the first electronic calculator, Intel came up with the 4004 microprocessor, which is the 4-bit grandfather of the 8-bit 8008, 8080, and 16-bit 8086 chips that would follow.  The microprocessor revolution started with a calculator.
The 4004 chip had limited capabilities, but it was still the first whole computer processor on a single chip.  The first real microprocessor operating system, CPM, was designed to run on the 8080 processor long before we had DOS or Windows.  CPM was all the rage in the mid-1970s.   Consequently, a company called Zilog came up with a slightly superior 8080 clone called the Z80 which was compatible with CPM.  The Z80 processor would go on to be used in the TRS-80, Sinclair, and Timex-Sinclair computers, as well as a whole series of MSX computers in Japan.  The chip would also be used in a few videogame systems.
On a more personal note, most early videogame systems did not have any kind of operating system or high-level language that they could be programmed in.  This meant that they had to be programmed in the language of the microprocessor itself, which is called machine code.  This is considered not only archaic but also technically much more difficult.  In the 1970s, one of the first computers I got my hands on was an RCA 1802 Elf computer, which was incredibly primitive, but I learned to write 1802 machine code on it.  In the late 1970s, I learned Z80 machine code on the TRS-80 computer.  In 1985, on the Timex-Sinclair 2068 computer, I wrote a videogame in Z80 machine code, using a tool called an Assembler that I wrote myself.  Along the way, I picked up 6502 machine code, and in 1993 I got my first videogame job in Utah writing 65816 machine code, a more advanced 16-bit version of the 6502, for the Super Nintendo.  In 1999 I change jobs, and I was back to writing Z80 machine code on the Gameboy Color.  By that point, the Z80 was considered mostly obsolete, but it was still being used on Gameboys.  Because of my previous experience with the Z80, I hit the ground running on that job, and my new boss was so impressed with my programming skills that he gave me a raise after my first week.
Best wishes,

Posted by John Coffey at 7:34 PM No comments:

I have had much fun with the New York Times Wordle puzzle.  You have 6 chances to guess a five letter word.  Yellow means a correct letter, and Green means that it is in the correct position.  There are some interesting phone apps that are clones of this. 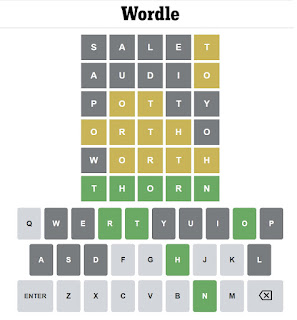 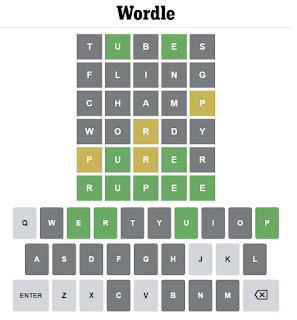 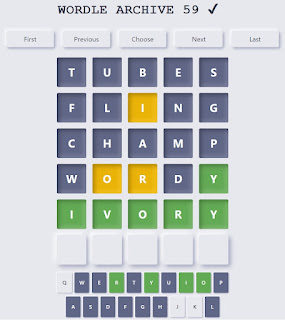 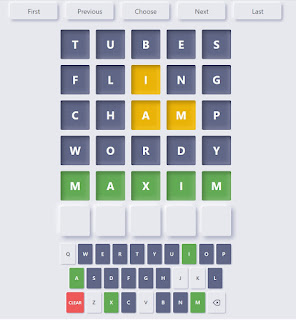 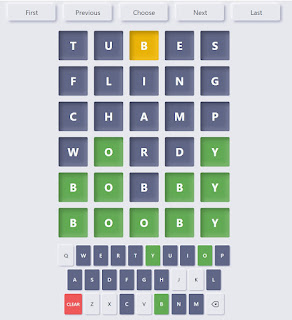 http://www.entertainmentjourney.com
Posted by John Coffey at 9:05 PM No comments:

Re: The Monty Hall problem and IQ

This video shows the very well known "Monty Hall Problem". Monty Hall was the game show host of Let's Make a Deal. At the end of each show the winning contestant chose door #1, door #2, or door #3. So, if Monty Hall says there are goats behind 2 doors and the grand prize behind one door. So, let's say you pick door #1. Monty now says I'm going to help you by letting you know that door #3 has goats.
So, speaking mathematically, should you keep your original pick of door #1. Or should you change your pick to door #2?
Btw, normal IQ falls between 85 to 115.
https://youtu.be/dOQowCeAnRs

I've been aware of the Monty Hall Problem and its controversy for some time.
It is the best illustration that intuitive notions aren't always correct.
IQ scores of 85 to 115 represent one standard deviation from the norm.  One standard deviation will include 68% of the people usually regardless of what it is measuring.
Mensa is a social organization that only accepts people with IQ test results two standard deviations above the norm, which is the top 2%.   However, different IQ tests have different ranges producing different numbers.  The Mensa website currently lists different scores on different qualifying tests ranging from 130 to 132.  However, when I took the Mensa test in 1986, they were using different numbers.  They gave me two tests and I only had to pass one of them with either a score of 136 on the standard test or a score of 148 on the California test.  I scored 136 and 147, just barely passing.
I actually thought that I could do better.  Roughly twenty years ago I took an online test that claimed to be scientific and accurate.  I scored 138.  I waited a few years and took the same test again and scored 141.  This test factored in the age of the person, but I haven't seen any other test that does that.
Last year I took a short 20 question IQ test advertised on Facebook, which claimed to be scientific, but I have my doubts.  I took it three times because I kept scoring in mid 120s.  I was not able to improve my score.  I'm not sure how much of this result is due to my age, or just the result of this particular test.
Many people think that IQ is a difficult thing to measure and does not take into account all the ways that people can be intelligent.  If a test only measures analytical and spatial reasoning, which is what these tests usually measure, I suspect that I would do well.
Best wishes,
John Coffey
Posted by John Coffey at 10:59 AM No comments: