All,
Steve Dillard of Louisville fame passed away yesterday after being murdered by a former troubled student that he had tried to help.  A school teacher, national tournament direction, chess promoter, former president of the Kentucky Chess Association, strong Class A player, and generally regarded as Mr. Chess in Kentucky, ran over 3000 weekly or twice weekly g/30 tournaments in Louisville for at least 20 years.  Not only have I played in his tournaments since the 1990's, but his tournaments were the inspiration for me running G/30 tournaments in Salt Lake in the 1990's and then later weekly quick tournaments.
His Monday night tournaments would get 30 to 50 people.
This last Monday Steve and I had a lengthy conversation about my attempt to look for a house in Indiana.
Steve was president of the Kentucky Chess Association at the same time that I was president of the Utah Chess Association.  We had sort of a long distance friendship and we would occasionally call or write each other to talk about chess.
He actually played in at least one of the chess tournaments that I ran in Indiana in the early 1990's.
About 8 to 10 years ago Steve visited Utah, contacted me, and attended my chess club and also met with some local players at Crown Burgers to play
He was 55.
Best wishes,
John Coffey 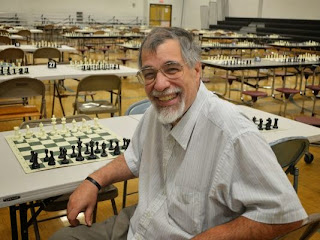 March 14, 2015
Everyone,
In case you haven't yet heard, Steve Dillard has passed away.
Chess has lost a true maven and devotee of the craft. He had many friends, and he left us too soon.
Apparently, he may have died sometime between Thursday and Friday.
No word yet on memorial services, but once I hear something, I'll be sure to pass it on.
I've known Steve a long time. He was a man of character, and was completely devoted to chess.
I can remember- I think it may have been in the 80s- that Steve would organize tournaments at the Louisville Zoo for Afghan war refugees (these were refugees from the Russian invasion that started in 1979). He called them "Afghan at the Zoo" and "Afghan II at the Zoo". These were outdoor tournaments. Steve was a familiar face at many national events as well. He was a tough player, too: he could always be counted on to give one a run for their money.
I've played in so many games at Meijer's I've lost count. Steve pulled me over one day and told me that I had crossed the 1000 tournament threshold. Much of that was due to the Meijer's events.
I know we'll all miss Steve. He's been a long-time presence in Kentucky. And he was a good friend. A number of us worried about Steve last year when we visited him in the hospital. He had a close call at Bluegrass Magic Shoppe, and thanks to Ken, Steve got the medical attention at the hospital he needed. Steve struggled w/ diabetes: I don't know if that's the cause of his passing, but whatever the reason, he has left a hole behind for all of us.
For those who want to continue to honor Steve's legacy by playing at Meijer's, I think Ryan is already laying claim to continuing the tournaments there on the KCA website (Ryan cited some conversations that he allegedly had w/ Steve about taking over from Steve:
Steve had been in talks with me and John about transitioning his tournaments, including Blue Grass State Games, to me and John. John will be there on Mondays and Thursdays from now on.

March 13, 2015 at 8:05 PM
- of course, just recently, Ryan cut Steve off of access to his account for the adults, but I digress), but I'll be talking to the management about sharing same so that all adults will feel welcome in playing in Louisville; possibly, tournament can be rotated between Ryan/John and other TDs.
Meantime, I don't want to harp on our differences, but suggest that all of us take a minute of silence in memory of Steve.
Chris
(410) 227-9648